Owning a side hustle is like owning a little black dress, everyone wants one and just about everyone has one. Here, we share the rise of the side hustle craze and how to jump on the trend.

Unless you’ve been living in a cave, you’re probably familiar with the side hustle craze that has exploded in the past few years. As if one full-time job weren’t enough, 40% of UK workers now have a side hustle – a secondary source of income on the side, and something they work on during their evenings and weekends. This percentage is set to rise, and it’s predicted that by 2030, half the adult population in the UK will have some form of a side hustle. There are many reasons why people might decide to take on a side hustle. Necessity is the obvious one: with the rising cost of living and stagnating wages, often a primary salary isn’t enough to get by on, forcing people to spend their free time making extra money on the side. But even if you’re financially comfortable, a side hustle is a chance to express creativity outside of your typical work environment and learn new skills – extra cash being a (very nice) bonus.

It’s thought that millennials are the most likely group to partake in the side hustle trend because of the fact that they started their careers during the 2008 global financial crisis when no job was safe and the competition was rife. Side hustles provide a form of back-up so that if the worst happens and you lose your job, you have another way of bringing in some money. All these side hustles present an upside for the economy, too: in the UK last year, side hustles collectively generated £72 billion, which amounts to 3.6% of the national GDP.

As long as you can handle the extra workload without risking burnout, the variety of side hustles means that there’s literally something for everyone – whether that’s starting an organisation for business women, making handcrafted jewellery, or writing musicals. The additional work – and inevitable stress – shouldn’t be underestimated, but the sheer number of people with side hustles shows that it’s possible to juggle different projects without dropping the ball. Before you embark on your side hustle journey, there are a few things to think about to make sure you’re able to take on a new project.

Do you actually have time in your schedule to fit in a side hustle?

As basic a question as it might seem, do you actually have time in your schedule to fit in a side hustle? If your side hustle involves organising events, for example, you’ll have people relying on you to follow through, so make sure you’re clear on how much time per week or month you’ll need to set aside.

If you want to do something on the side but aren’t sure you can dedicate consistent time and effort, consider working on a project purely for personal enjoyment and as a creative outlet. That way, you won’t have people relying on you to keep up with your side hustle and you can easily take a break if things get too hectic in your day job.

If you’re sure you can fit your side project into your agenda, give some thought to whether you have the headspace needed for a side hustle. While some people might find a creative evening project relaxing, if your hustle involves paying customers, for example, it might turn out to be more stressful than it’s worth.

Finally, think about the why. Why do you actually want to start a side hustle? Is it purely to have something to add to your LinkedIn to gain extra skills? or is it something that you’re actually passionate about? If it’s the former, think about volunteering with an existing organisation or supporting another side hustler in order to gain skills and get a sense of fulfilment – if your heart isn’t in your side hustle, it’s unlikely you’ll keep it up, and you’ll probably just be wasting your time.

For some, the ultimate goal is to turn their side hustle into their day job. But as Harriet Webster, a side-hustler from London, explains, that doesn’t have to be the goal. Her side hustle is creating Hattie Comics, a satirical take on pulp romance stories and retro teen magazines, which she runs alongside her day job as Head of Content Marketing at a financial services company. “I’d love to make comics my day job but that’s a privilege very few artists have, and I still have lots to learn,” she says.  Harriet points out that her day job actually benefits her side hustle, and motivates her to dedicate time to it: “Working as a writer in a corporate environment not only gives me endless material for storytelling, it also motivates me to pick up the pen after work; and when I do, I feel really good.”

Emily Chappell is a production assistant at a digital agency, and is the marketing manager for Future Girl Corp in her free time. Future Girl Corp is a non-profit that runs a 12 month program to help women in all stages of their businesses. Her role at Future Girl Corp is multi-faceted and can involve managing social media, writing articles for their website, and managing the new FGC Worldwide program. Emily’s secret to fitting everything in is short and sweet, and straight to the point: “I’m a workaholic!”.

Do you have a side hustle? Tweet us at @fwladies and we might just feature it on the site. 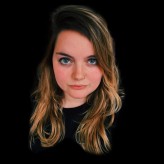 The best podcasts for learning on-the-go

Tackling self-doubt when you work for yourself